Reviewed: Maiden Flight of the Avenger by Alex White 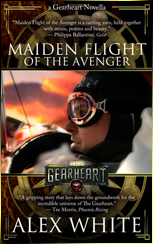 Journey back the universe of The Gearheart. In this prequel novella, agents Augustus Elsworth and Isabelle Carriker battle wise guys, betrayal, nefarious powers on high and each other, while attempting to unlock the secrets of Augustus’ mentor and harness the full potential of a hybrid mechano-alchemic engine before its power is unleashed on an unsuspecting world. Just so you know, I hadn’t intended for this to become the Alex White month of reviews, it just worked out that way.

We get to see Augustus in a completely different light in this story. In The Gearheart, he was much a follower. In this tale, he is a rebel; loud, cantankerous and proud, not at all the shy and retiring Elsworth we were used to. And while this tale is clearly about the mechanic, we also get to see another side of Isabelle; one where she isn’t defined by her relationship to Jonathan.

There seems to be a working formula in Alex’s stories. In Maiden Flight of the Avenger, as with The Gearheart, the story begins with the heist of a magical geegaw (currently in the possession of the mob) that goes awry. As events unfold, the doodad is more a MacGuffin than anything else. Then, the fun truly begins.

Fans of the first tale will definitely enjoy this one. Alex has woven subtle clues into plot that serve to enhance and define this world. The Seekers of the Arcane Unknown are prohibited from revealing themselves to the general public, which wasn’t the impression I got from the first novel. It’s not a retcon so much as a clarification.

Using a splash of realism, the mob does know about them, but the Seekers dismiss this breach as the price of doing business. I marked that as a precursor to the corruption evidenced in the latter (story-line-wise) work.

When world building, there is a certain consistency required, especially with magic. Today’s readers aren’t all that fond of having a wizard pop in and solve all the problems with a “Poof, there it is.” David Eddings addressed this particular issue in his novels by making magic use as difficult as physical labor. Alex places limits on this use in a delightfully different way: Magic is the exploitation of the fundamental laws of reality; alchemy rewrites them.  This makes alchemy dangerous and prohibited by the Seekers.

This doesn’t stop Augustus from utilizing it. In what I consider a stage-setting moment, Augustus is reprimanded for this breach of Seeker protocols, but not held accountable for it. We find out the the practice of alchemy is a very bad thing; however Augustus is not thrown out of the Seekers for practicing it. He is not killed (though it is hinted that he should be) or demoted or even censured.  Instead, he is rewarded!

The Seekers allow him to complete The Avenger and participate in the Cliffside Aeroprix. In a nudge, nudge, wink, wink moment, we get a glimpse of the fallen nature of the Seeker council. They want results, period, and are perfectly willing to look the other way while Augustus creates the results for them. This dovetails nicely into the actions of the Council in The Gearheart.

The podcast of Maiden Flight of the Avenger is eight episodes, each about half an hour or so in length, created with the same zest and pizzazz as The Gearheart. What I found to be the most striking technical change was Alex’s voice. It has matured considerably in timber and pitch since the first episode of The Gearheart. It is much smoother and richer and is very easy to listen to.

His wife, Renee continues to voice Isabelle, one of my favorite characters. (no Alex, I haven’t quite forgiven you for Isabelle yet) She brings back all the verve, sass, nerve and pluck one expects from an Agent of the Seekers of the Arcane Unknown. New to the ‘cast is Brooke Fox and she does a splendid job as well. Makes me wonder if she has done any other voice work.

For this next bit and by way of disclaimer, I listened to the majority of the podcast on my handy, dandy Bluetooth earpiece — not headphones. Some of the dialogue sounded a bit overproduced and clipped and at times the fantastic soundtrack (kudos there) overpowered the actors. Let me emphasis this didn’t appear to be chronic and in no way detracted from the story as a whole, but when it happened, it did stick out.

Alex has pulled out all the stops with this release. It’s available in podcast, Kindle and dead tree editions. He has also released the soundtrack (@ iTunes) and beginning May 18th, Maiden Flight of the Avenger will be available at Podiobooks.

All in all, an outstanding romp in The Gearheart universe. Now, I wonder if Alex can be coaxed into the prequel where Jonathan finds Cog and discovers his genetic possession by Audun Slade …

This post originally appeared May 13th 2011, on my old site It was a Dark & Stormy Night … I have graciously given myself permission to repost it here, in lieu of original content and/or to preserve it for hysterical purposes.