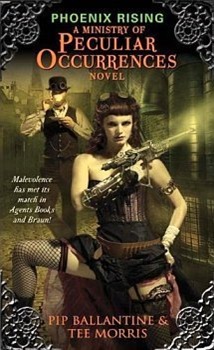 It’s the highly anticipated, often promised, much delayed and completely unsolicited review of Pip and Tee’s Phoenix Rising! Yup, I finally finished it, after a series of fits and starts that won’t be named here.

I consider myself something of a steampunk purist, if there is such an animal, and this tale suits my Victorian cup of tea quite nicely. Set in a London that never was (sometime between March/April 1894 and January 1901), we have airships, a madcap coach chase through the downtown streets, a secret society bent on world domination, a series of Lovecraftian deaths and steam powered cyborgs!

I wish I’d had the time to sit down and read this all at once! It is extremely well written, with fully realized characters and engaging situations. This is no surprise as both Pip and Tee have rather impressive personal publishing pedigrees. I’m not really sure this qualifies as a freshman effort, even if it is the first book they have co-authored.

Phoenix Rising spins a fantastic pulp yarn centered around the odd couple interactions of the protagonists: Books and Braun. Sharp and witty dialogue virtually spits fire off of the page! “Chaos and mayhem comes naturally to you, don’t they, Miss Braun?” And I have to take my hats off to them, Pip and Tee refrained from “the hapless partner” syndrome. I think we’ve probably all seen this before, where one member of the team is almost helpless, making the other team member appear to be super-proficient. Not so with our heroes.

Despite the role reversal, the upper class Books is neither helpless or flailing. He over comes his aversion to firearms and proves to be a most proficient shot. Likewise, in spite of her rash propensity to blow things up and start fist fights, Eliza shows herself to be thoughtful, loving and caring. We’re not dealing with a set of one dimensional characters here.

Ah, yes! The initiation ceremonies. I held my breath through the end of chapter 22 and except for (very) brief mentions in chapters 23 and 24, the subject isn’t brought up again. I think that Pip and Tee were trying to show just how arrogant and depraved the Society in general and Devane in particular were. I was already there, what with their poisoning one of their own and their constant chicanery and backstabbing; I didn’t need the visual. I don’t think it was needed. However, they are published and I am not. So, your mileage may vary.

Aside from that, I thoroughly enjoyed Phoenix Rising and look forward to what comes from the Archives next!

This post originally appeared May 23rd, 2011, on my old site It was a Dark & Stormy Night … I have graciously given myself permission to repost it here, in lieu of original content and/or to preserve it for hysterical purposes.