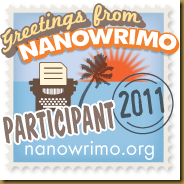 This first week started out with a bang and ended in a sputter. Tuesday, Wednesday and Thursday, I cranked out what is for me an impressive 8,695 words. Then on Friday, Saturday and Sunday, nothing. Not a squeak. Now, I could come up with a host of excuses for the drought but the main reason is lack of BIC. All of this means I have a lot of sitting in the near future, cause with Thanksgiving coming up at the end of the month I won’t have a lot of time to play catch up. For my money, the single best thing an writer can do to improve his writing is, well, to write.

Another lesson learned, don’t lose momentum. I had a ton of momentum going into Friday, then I squandered it. It’s hard enough to develop the discipline to write, try getting it back after an attack of slacktidous!

Again, not wanting to appear like I’m whining, just trying to convey the difficulty I’m having getting back into that groove I had.

I had a hard truth to face; no matter what grand plans I may have, the plain and simple fact of the matter is unless I continue to write, Project Mjölnir isn’t going to get finished. That was quite the reality check.

Last lesson learned actually came from Jeff Hite, a podcaster I follow on Twitter. He (along with others) suggested posting some of the raw drafts from NaNoWriMo on his blog. I balked at the thought initially, but after some consideration (and reading some of the other authors entries) I’m going to float an example for comment. In other words, why or why didn’t you like it. I’m not sold on this. My initial drafts are tedious and filled with errors and clearly not my best effort.

This is also the draft I’m going to float by my writers group. Please remember, this is a draft copy. That means that it is a raw, unedited story likely to be replete with misspellings, questionable grammar, odd phrasing and tenuous logic. This copy may or may not appear in the finished product, or it may be substantially changed, altered or edited. In other words, enjoy it while it lasts, it may not come around again.

They are dancing under deep blue skies.
His little girl stands on his feet and grabs his hands.  They dance in a meadow, turn after turn, to the sounds of joy and laughter. Gentle breezes waft dandelion seeds to and fro in the warm summer sunshine.
“Spin me, Daddy! Spin me!” she cries and leans back, clutching his hands tighter and tighter. Her bright face is upturned, her sparkling eyes watching the skies.
“Faster, Daddy! Faster!”  She shrieks in exaltation as she and her father whirl about.
“Careful, honey,” her worried mother admonishes from their picnic blanket. “You hold on tight to your father, you hear?”
Now, he is worried, too. He begins to slow his spinning.
“Now, chere, you listen to your mama,” he says, “won’t be fun for any one, if you fall.”
“You’ll catch me, Daddy,” she shouts. “You’ll catch …”
Her little fingers, slick with perspiration, slip from his grasp and she tumbles into the grass, looking, for all the world, like a porcelain doll in a pinafore, tossed carelessly into a corner.
He didn’t catch her! She trusted him and he didn’t catch her! He rushes to her, as she begins to wail …