Project Mjölnir – Phase 1 is Over … But Wait, There’s More! 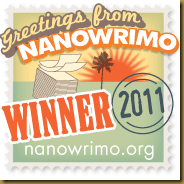 We have a winner! After an interesting month, I finally stumbled across the finish line about 2:30 this morning with a total of 50,192 words! I done, but I’m not done-done, I still have more story to go. I’d have to say that I’m about half way through a tale of heartache, angst, passion and things that blow up … in space. Oh, and starships, hostile aliens, giant killer robots, nefarious politicians and damsels-not-in-distress. (“We can take care of ourselves, thank you very much!“) I have managed to pull off Phase 1, but that was the easy part! Project Mjölnir rolls on; I have December and January to finish the draft and complete the edits. This is no time to shilly shally.

NaNoWriMo was a win, but is wasn’t a pretty win. Thanksgiving week I spent four to six hours a day, hammering out deathless prose at a rate of eight to ten thousand words per day. That saved me. I would have been far better off if I’d stuck with the 1,667 words per day suggestion, but I’ll get to the hard lessons learned a bit later. How much of the final push am I going to keep? Well, all of the ideas generated in the final seven days will be incorporated in some fashion, however looking over what I actually ground out; very little of the prose, at least in its current form. There’s going to a world of editing and rewriting in my future.

I did (finally) pick up some tips I found useful and some habits I found helpful. I may sound like I’m weaseling around, but after all of the pep talks, write-ins, critique groups and helpful family suggestions, the only thing I found to be universal is you need to pick what works for you! And this is what worked for me:

There are likely more, but a sensed a theme when I started repeating myself, so I stopped. Now that I have established something of a habit with my writing, I’ll be back on a more regular basis.

No, seriously, I will.