Ninja Elves, the Ghost of Christmas Past and Nutcrackers 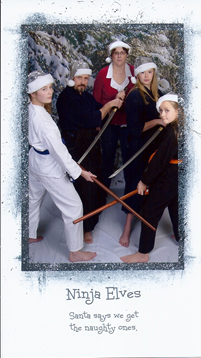 Joyeux Noël, Bonne Christmeusse, Fröhliche Weihnachten, God Jul, Feliz Navidad, Maligayamg Pasko, Merry Christmas! It has been a fun filled couple of weeks at the Ellis household. Click the card for a full blown visit from the Ninja Elves! After many years of planning to send Christmas cards, this year we managed.

I’ve been fighting a sinus infection off and on for several weeks. As a result, I haven’t done a lot of posting. Time to remedy that. I’ve got several irons in the fire and a fairly busy holiday season planned. Aside from the holiday cheer on the left, I’ve also participated in a group reading of A Christmas Carol with The Podcast Community on Facebook.

My part starts about 10:29 in and you can tell from the outset that I’m the neophyte. The audio is low and a little muddy. I’m still working out the kinks with my audio setup. Still, I had a lot of fun so hopefully the enthusiasm will shine through if nothing else does. You can listen to it below or download it from here. For whatever reason, I fail at embedding the player. I’ll do some more research and try again later.

Between now and Christmas, I’m working on a very short story for the weekly challenge at 100 Word Stories involving a Nutcracker, tinsel and three blind mice. I’ll let you know when I’ve submitted it. I’ve also signed up for Starship Modeler’s Seeds contest. I don’t know that I’ll have the gas to get that one completed by January 2nd. We’ll have to see. Plus, I’ve got another project simmering on the back burner that I’ve been playing with for a for a while. More on that later; later being another post.

Progress on Project Mjölnir proceeds apace and I’ve had the opportunity to clean up the blog a bit. The Hierarchy of Dominance is coming together nicely with the help of my good friends at The Midlothian Writers’ Workshop. They have had to plow through an enormous amount of deathless prose so you won’t have to. Thanks Jarod, Anita, Gail, Pat, Blaine and Louis! (Mel, where are you?) One of my questions was featured at I’ve become my parents. And, I’m sure there will be cookies, joyous Christmas cookies, to eat along the way.

Of course, all these plans presuppose that the offspring are willing to allow it.

There are also Legos to build, models to complete, school work to grade (ah, home schooling), hallways to paint, offices to clean and year end paper work to complete. Good thing I took a week off.

Yes, my sick days do roll over into the next year. Why do you ask?