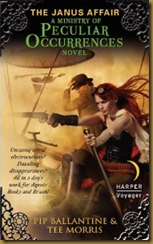 To give you all of you some idea of my summer, I started the process of this interview with Pip & Tee back in May. MAY! They got back to me in June and then my summer-itis hit and its been parked ever since. Hopefully, our two agents from the Ministry will not hold the delay against me.

For those of you not acquainted with Pip & Tee, there are a slew of links at the bottom of the interview. Please feel free to check our authors out.

A review of The Janus Affair will have to wait. Among other things, reading also got put on the back shelf this summer. It’s on top of my TBR pile (Is it a pile if it in your Kindle?) and I hope to get at it soon.

On to the interview, without further adieu.

Give me your back-of-the-book synopsis on The Janus Affair.

It is the continuing adventures of our secret agent from New Zealand, Eliza D Braun and the Archivist for the Ministry of Peculiar Occurrences Wellington Thornhill Books Esq. Still demoted, Eliza and Wellington on a train journey find themselves witness to something very peculiar; a woman disappears in a ball of lightning. Since Eliza knew the woman, and saw the event, she drags Wellington into another unauthorized adventure. Soon they are up to more daring-doing involving the suffrage movement, airships, an old flame of Eliza’s and the deliciously deadly Sophia del Morte. We also get a few more glimpses of the mysterious figure from the end of Phoenix Rising, The Maestro, and a few more continuing plot threads from their first adventure evolve.

What kind of research, if any, did you do for this latest outing?

Tee: In a word — history. Lots and lots of history. The trick about steampunk is your “world building” is done. It’s called the Victorian Era (or what the countries outside of the Empire referred it to, the 19th Century), but where it gets tricky are the details. Things like when were the All Blacks (the NZ national rugby team) first came together. What were expeditions up various mountaintops like? How were suffrage chapters organized? For me it’s the details of the era we need to know that make the world less of history and more of a real world with real people, so we collected a lot of links, images (even some film!), and commentary about the time. Then we bring in the technology of steampunk, and we as writers now have to extrapolate how this technology would look, what would it be its effect on the society (if any) and whether or not it would have a place in this world.

What is the appeal of Steampunk? Why does it have the reach it enjoys?

Pip: I think it has a lot to do with the modern age, where even though we love technology, most people don’t feel the really know it. Steampunk is set in an age where you feel you could understand technology. Cogs, gears and pistons seem so much more comprehendible somehow. So there is an element of nostalgia. Also the Victorian age was one of darkness and opression, yes, but also one where there were still unexplored places, and undiscovered things out in the world. 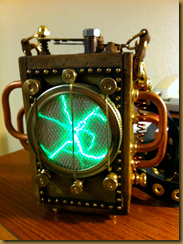 Tee: I really think the appeal of steampunk is the boundless imagination you find in this genre. After spending two weekends shooting steampunk with the talented people of Brute Force Studios, we discovered that every item they create have some kind of story behind it. How does it work? What does it do? Whatever the gizmo a steampunk has, you would be hard pressed to find someone that says “I don’t know what it is. It just looks cool.” Every gadget a steampunk has on them has a story. There is also a story (and in most cases, a signature style) in the physical design of the fictional technology. so with steampunk you not only create the tech with a sense of style and panache, you also give it a story as to what it actually does. To me, that is very intoxicating and seriously fun.

You are both established writers. How does writing with a co-author differ from writing solo? Have there been fundamental differences in plot direction or character development and if so, how are those resolved?

Pip: We argue a bit. Well, honestly we haven’t come down to a bare knuckles drag out fight. Mostly if there is something one of us disagrees on, they have to logically fight for it. Give reasons. If that doesn’t work we present the worst cases to our agent, Laurie McLean and she picks a side.

Tee: Laurie is our moderator. The Switzerland of our writing relationship. Yes, we have disagreed and yes, we have engaged in “spirited conversations” on the right way to resolve a situation. However, for one of those heated exchange, we enjoy five (or more) enthralling deep-dives into one another’s imagination, brainstorming on what we want to two next and how to resolve certain situations. We also like surprising one another, and we hope that sporty of fun we share when writing together comes through in the end result.

What parts of the writing process are easier when writing a sequel? What parts are more difficult?

Tee: The easiest part of a sequel is the introduction (for the most part) is over and done with. People have met Books, met Braun, know what they do, and so we can get on with things. The first challenge with any series though is not alienating those who might arrive late to the party and drop them in the middle of a setting where they have no clue who Doctor Sound is, why Sussex is gunning for the Ministry, and so on. this means you have to take an occasional step back — no more than the odd line or two — just explaining to people what the situation is.

The greatest challenge, though, of any sequel is bringing your fans from the first book all the same stuff they loved but just give it to them all brand new. If you fall back to too much of the same old stuff, your fans will get bored. If you deviate too much from the original feel of the prior books, the fans will long for the “good ol’ days” of Book One. And with each sequel it gets harder and harder to do. I guess that is why some authors will use tell ONE GREAT BIG STORY across four or five books. The “sequels” are just picking up where they leave off. Now don’t get me wrong — that kind of epic storytelling is awesome and I admire it, but I also liked how you could pick up any of the Harry Potter Novels and figure out what was going on. I think continuing threads are fun in a series, too; but i also enjoy it when each book is an adventure in itself. As a writer, though, you face that challenge of bringing in the new but keeping the good stuff from previous books.

Which characters (if any) have changed in surprising ways from your initial vision? 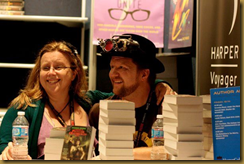 Pip: For me it is always the villains. They always reveal more and more as the stories progress. The Maestro has become quite slippery, and is slowly showing his hand of cards to both us and the readers!

Tee: Agreed. The villains have been charming the readers quite a bit, and developing the Maestro’s thread has been a lot of fun. Twists and turns a coming with that. Also, particularly in the second book, I think the Ministry Seven come into their own. I always pictured them as Books and Braun’s own Baker Street Irregulars, but in this book we got to see traits of them as individuals. I enjoyed their roles in The Janus Affair immensely.

Pip: I find so many of the characters fun. Eliza is very dear to my heart, and Wellington is just such a charming geek…but I have to say of the others I love Alice, Eliza’s maid. She has a story to tell, and a life well lived even at a young age. You never know just what she will pull out of her leg!

Tee: It’s hard to pick and choose a favorite. Every character has been a delight to work with. It’s a bit like watching Mad Men or Game of Thrones, you know? Every character has a moment and you really can’t see the chemistry working without one of them…but if I were to pick one, I think along with Eliza and Wellington, I am drawn to Doctor Sound. Even though I know what his motives are, I also think he has a surprise for me and Pip in the future. He’s enigmatic, and his role in Books’ and Braun’s story should continue to unfold.

Is it more fun to plot and write the heroes or the villains? Would you elaborate?

Pip: Well the poor old heroes are always playing catch up with the villains—trying to foil their plots and all.

Tee: I’m having fun working both angles. My mission, and I like to think we’re doing this, is making the characters real. Much like how Tom Hiddleston made Loki genuine in The Avengers when he asked for that drink, and of course when Earth’s mightiest superheroes were chowing down on the shwarama. i want both the good guys and the bad guys all have real moments.

What is your “creative recharge” activity? X-Box? White-water rafting? 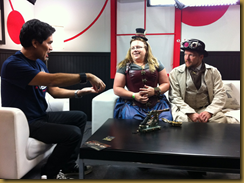 We have just pulled out of a crazy month of May, with all sorts of conventions, and work pulling us in all sorts of directions. So I am looking forward to some recreational reading, a spot of gardening, some grilling and perhaps a late night stogie by the fire pit, and playing some Skylanders with our daughter.

What’s ahead for Books and Braun?

Well we can’t reveal too much, but let’s just say they head off to America. Once there, they make some new friends and foes. (Serious props to Jack Mangan for creating such great canon in his Tales from the Archives entry.) They may also meet one or two famous people…and hopefully not get them killed. We are also mapping out further adventures for the two of them after Book Three, and we might also get a few more glimpses of what they are up to in between books. Books, Braun, and the other agents of the Ministry have been getting quite a bit of exercise in the podcast, so we have a lot of options. Like we mentioned earlier, in this world, possibilities are boundless.

Tee: Author of Aladdin and his Infernal Device