An Ark Full of Archetypes 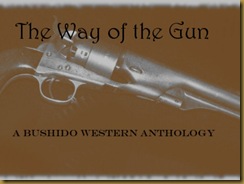 I’m more than a little excited about this Kickstarter campaign from Scott Roche. It takes me back to those rainy, Saturday afternoons when my brothers and I would watch one Gene Autry or John Wayne western after another until Mom and Dad got tired of us being underfoot and shooed us off to clean our rooms. When they’d leave to get groceries, we’d sneak back into the den and catch dubbed Japanese martial arts films. We’d have to go to the den because back then we only had the one television. Apparently the buzzing sound the tube made attracted the dinosaurs.

This anthology is all about that rainy afternoon when you could be both the stoic gunslinger and the fiery Kung Fu master. It is the swirled cone of chocolate and peanut butter that is the genre mash-up of Western and Wuxia. It’s adventure to the W2 power!

Okay, let’s agree to not pick nits about my Wuxia reference. Yes, Wuxia is primarily a Chinese literary form and Bushido is the Japanese “Way of the Warrior.” However, let’s that a look at the underlying meanings.

The Wuxia (“martial hero”) adheres to the Code of Xia, the Samauri to the Code of Bushido, and the Cowboy to the unwritten code of the West. Scott takes his cue from these thundering archetypes with his development of the Ranger, a cross between Walker, Texas Ranger and Kwai Chang Caine. These paladins ride the range seeking students to induct into The Way of the Gun. The Way allows these student to graduate and enforce the law as members of the Martial Order.

This isn’t just a western, Scott is throwing some steam into it as well with the introduction of the followers of The Clockworker. A “Cog’s” gathering would look like a cross between a Quaker meeting and a Maker’s Fair. In other works, largely peaceful unless you rile them up! Think of Will Kane from “High Noon” or Sheppard Book from “Firefly”; holy men and women on a mission.

The Rangers of the Martial Order use The Way of the Gun to bring order to the Wildlands. However, their grip is slipping as peace has turned to complacency. The followers of the Clockworker cannot stand against the violence of the Oklahombres and red-sashed Cowboys on their own and the Rangers are finding themselves outgunned and outmanned!

It’s a rich world of tinkerers, healers, gunslingers, and inventors; of blazing-eyed villains and lantern-jawed heroes; of good intentions gone bad and the path to redemption. It is that rainy Saturday afternoon!

So, why am I telling you this? Well, like I said, I’m really excited about. I’ve worked with Scott before on his “Tales from the Grim Reader” series as a reader. I like his style and his choice of subject matter. Joining Scott in this endeavor are the amazing talents of: Doc Coleman, Zach Ricks, Jared Axelrod, Jake Bible, Justin Macumber, and Nutty Nuchtchas.

Scott’s Kickstarter Campaign ends November 2nd. Skedaddle on out to the site and back this effort. It’ll be a load of fun! If you’re not sure, Scott has provided the first 6,000 words of his story free of charge! Get the PDF here! Read it, love it, back it!