Another November, Another NaNoWriMo 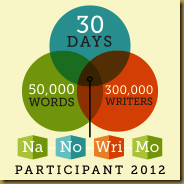 30 days, 50,000 words, umpteen cups of coffee! NaNoWriMo time has arrived again. This seasonal event has become a tradition of mine, if 3 times can be called a tradition. If nothing else, it helps to establish, reinforce, or (in my case) reestablish the habit of writing something every day. Editing, proof reading, grammar … faugh! This is about producing content!

This year is going to be something really special for me. I’ve been telling you in previous posts about Scott Roche’s The Way of The Gun over at Kickstarter.com. As of this writing, Scott has less than a day left. Go, contribute, enjoy!

Anyhow, Scott has given me permission to set my NaNo book in his universe. I’m extremely excited about this! Of course, now I have to produce a novel. Let me tell you a little about it.

The Way of The Gun is first and foremost a western, but not like any western you’ve seen before. We have the Clockworkers, a cross between Quakers and Makers. If you have ever been to a Maker’s Fair, then you have an idea of the character; they don’t want any trouble, but they’ll design an auto-mortar to take care of it, if it comes around. They add a decidedly Steampunk element into the mix.

Also present the Martial Order. Philosophical brothers to the old Samurai masters, these individuals advocate strength and stability through resolve, nobility, and strength of arms. Not a formal law making body, they instead choose to influence people by creating a more noble culture. They are also savvy enough to know they will need a group to enforce this change.

Enter the Rangers, like the Texas Rangers but with a healthy dose of wasabi. Almost everyone who enjoys a good western movie knows that some of the best are remakes of Japanese Samurai movies.  The two genres compliment each other and share many of the same elements. Imagine the two combined!

Every story needs a villain. Enter Bobby Joe Morales, a zealot dangerously close to going off the rails. Newly minted leader of the Cowboys and Oklahombres gangs, this young and green Ranger is bound and determined to bring his own brand of justice to the Wildlands, with or without the consent of the Martial Regimental command.

That’s the world I’m being allow to play in. I created an outline and ran it by Scott. I confess I felt somewhat like a party crasher, but he was gracious enough to give me permission to proceed. My novel, as planned, has five distinct sections, each telling part of the story; a story based in Japanese myth and legend. I’ll go into more detail next time.

In the meantime, get yourself over to Kickstarter.com and become a backer for The Way of The Gun. Come on, if the idea is this exciting, just think what the finished product will be like.