Reblog Sunday: Tools of the Trade 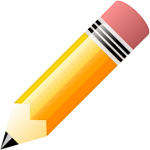 Growing up, my dad and I were pretty fair shade tree mechanics. (Well, I was growing up, my dad had already gone as far as he was going to.) This was before the age of electronic fuel injection, computerized valve timing, and proprietary software widgets. So, shortly after the earth cooled, but while Detroit was still hot, we’d put the car up on blocks and have at it. Often this would involve improvising the tool we needed from the tools we had readily at hand.  It led to some interesting compromises. Fortunately, as writers, the only tool we really need is a chair to put our behinds in while we write. However, there are plenty of ancillary tools out there and I’m going to give you my pitch on the ones I find the handiest. There isn’t a one-size-fits-all approach, so your mileage may vary. These work for me, but they may not necessarily work for you. It’s like pumpkin at the end of the year. Pumpkin muffins are great. Pumpkin lattes aren’t half bad. Pumpkin yogurt? Blegh! I’d rather gargle with pumpkin mouthwash!

I know there are plenty of you that like Scrivener. I’m not going to try and change that. It’s a good tool, but when I started writing in earnest, the Windows version wasn’t terribly stable or up-to-date. I understand that has been addressed now, so it’s worth a look. The feature set is quite impressive. However, my editor of choice is yWriter5, for a number of reasons:

If you have a smartphone, I can’t recommend this enough! Notes, scenes, chapters, or pictures can be captured on your phone, uploaded to your drive, and accessed from your laptop or computer. Dropbox is better known for sharing, but with the ability to share and create documents, spreadsheets, presentations, and more, I think the future it going to be with this guy.

Left to my own devices, I am the worst at effective time management. I just don’t have the genes. Or the time to wash them. This application, like Google Drive, is accessible and fully editable from any computer or mobile device, though it works particularly well with Android devices. I use it to keep track of blog post requests, writers’ meetings, story and submission deadlines, etc.

Other great free programs from Simon Haynes! With NaNoWriMo in the rear view, you may not think all that much about writing sprints. I use yTimer during my lunch breaks, to make sure my writing doesn’t bleed over into my day job. It’s handy, portable (like all Simon’s programs, you can load it on a flash drive), and the alarm is highly configurable, triggering either default or custom alarms. Sonar3 has become my best friend lately. It is a manuscript submission tracking program. When I began my mid-life crisis (writing), I was sure I was going to be a novel writer. The novel is still there, simmering on the back burner. However, I seem to be having greater success with my short stories. Sonar3 helps me track “which market has each story, whether a story has been sold or rejected and which stories are gathering dust instead of earning their keep.” Yeah, I cribbed that from Simon.

I used to be a Blogger guy. It’s an incredibly serviceable platform. Then, the programmer in me took over, and there is only so much you can do with that service. I switched to WordPress and never looked back. I host my own standalone site, so that’s a little different from WordPress.com, but still has the same extensibility and practically none of the restrictions. There is a WordPress app for the Android and I can update my sites from my phone.

I have been using this app a lot lately, dictating on my commutes to and from work, then transcribing the notes either at lunch or when I get home. It is superior to the default recorder mainly due to it streaming the audio to the sdcard instead of trying to hold it all in memory. This means I get to talk longer; with a 32GB external sdcard, a lot longer. You will need to decide if that is a good thing or not.  I know it is available for Android devices.

Looking back on this article, I feel I have geeked out on you all. My day job is in IT as a programmer so this sort of stuff fascinates me to no end. The technology is very impressive and it can be leveraged to great benefit. This list is mobile heavy, particularly for the Android platform. I have found having access to my writing on my phone has increased my productivity. Provided, of course, that the kiddos don’t install any games on it. All this technology can be a little intimidating until you realize that it’s all just ones and zeros. Embrace the binary! Here’s the other shoe: like social media, all these tools can be distractions, preventing you from getting the words on the page. Like I said before, your mileage may vary. So, Keep Calm and BIC On!

This post originally appeared December 2nd 2013, at the Wordsmith’s Studio, who have generously granted permission.