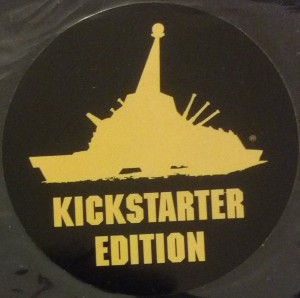 When Dirty Jon first asked me write a guest article, I’ll admit to some trepidation. I love to play board games, I just don’t know how much of an expert I am on them. He offered me these sage words of advice, “Shut up and write.” So, here we are.

One breezy afternoon in the early fall of 1977, I hopped on my bike – barefoot and helmetless, because I was a newly minted freshman in high school and invincible – and rode the one and half miles of residential roads to a little strip mall that bordered the nearest highway. When I write that now, it sounds incredibly dangerous, but it was the 70’s, so I was okay.

I liked this little mall because in it was a hole-in-the-wall hobby shop run by a retired Marine. Even as worldly as I was back then, I thought him to be a really cool guy. Well, that and it was a nerd haven. He frequently ran the bullies out of the store.

On this particular afternoon I was picking up some twenty sided dice for a D&D tourney that those without transportation to the mall were having during the upcoming weekend when I saw it in the impulse rack by the register. Microgame #1. Ogre.

I didn’t stand a chance, not really. I was already exposed to Fred Saberhagen’s Berserker series. The idea of sentient tanks was just plain awesome. And, the price was right, so I bought it instead of the dice and took it to the tournament. After the initial complaining, we were hooked. It was simple to learn, easy to play, and yet complex enough to not be boring. Better still, it fit in our backpacks, so we could take it to school. (Hey, I was a freshman, cut me some slack!)

For those of you wanting a bit more background on the game, here’s the backstory that first grabbed my attention, lo those many years ago, and here is the official site.

Over the years, Steve Jackson games has come out with six unique editions of the this classic, and I have tried to sample them all, including the computer game from Origins (seen as the reflective red smear in between Ogre/G.E.V and Shockwave below). 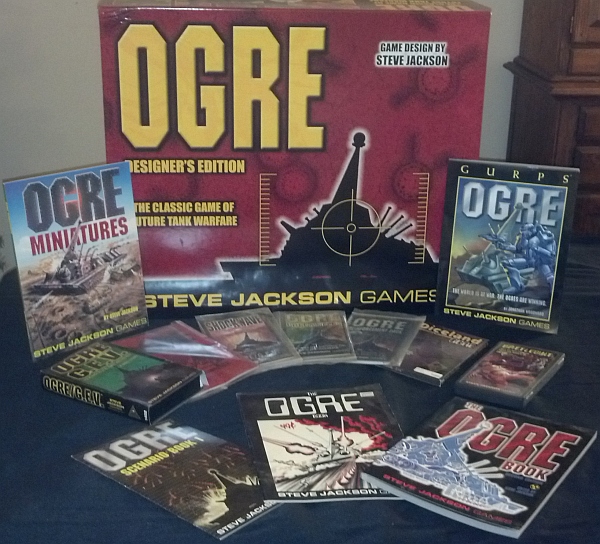 This is how the Designer Edition compares size wise to the others I have at the house.

I got on board with the KickStarter back in May of 2012 and my game, all 28 and a half pounds of it, arrived in December of 2013. Over 1000 pieces printed on super heavy card stock. It took me over three hours to assemble all of the 3D models. It comes with the classic, colorized Ogre map (21″ x 34″) and four G.E.V./Shockwave maps (28.5″ x 33″).  In addition, there are overlays to further custom the maps, including additional road and monorail segments.

The rules are revised and appear to be a compilation of standard Ogre, G.E.V., Shockwave, and tabletop rules. Unfortunately, the hexes are one and a half inches across, taking them outside the scale for tabletop play.

The units in the Designer Edition appear to be fairly complete, with the notable and glaring exception of the Ninja Ogre. But really, a stealth Ogre? (Never fear, Board Game Geeks is offering that unit and more with the blessings of Steve Jackson Games.)

The units come as Paneuropean and Combine forces, along with three other designations and, with the Kickstarter variant, blank templates to design your own. Here’s a look see at what is included in the Designer Edition: 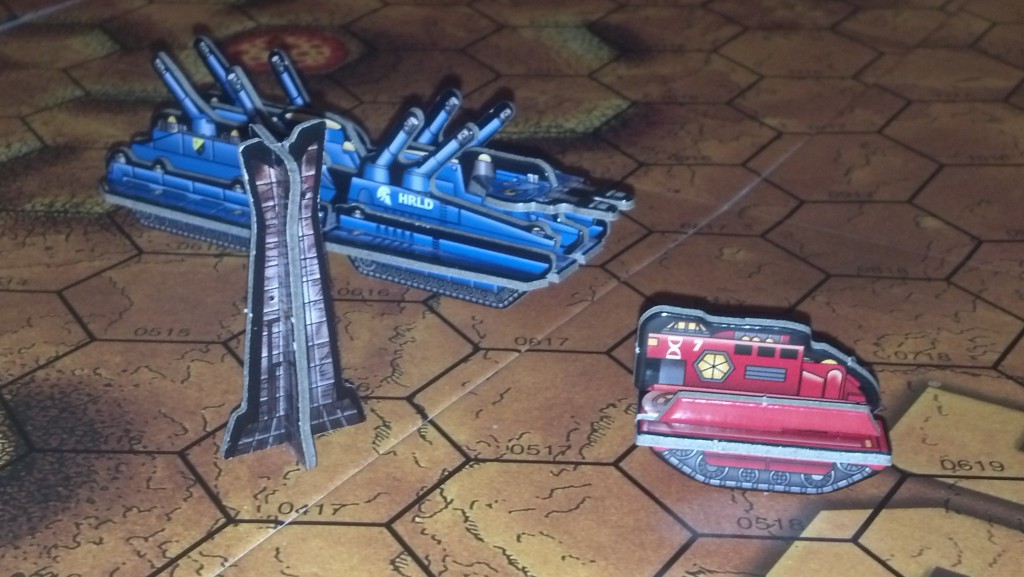 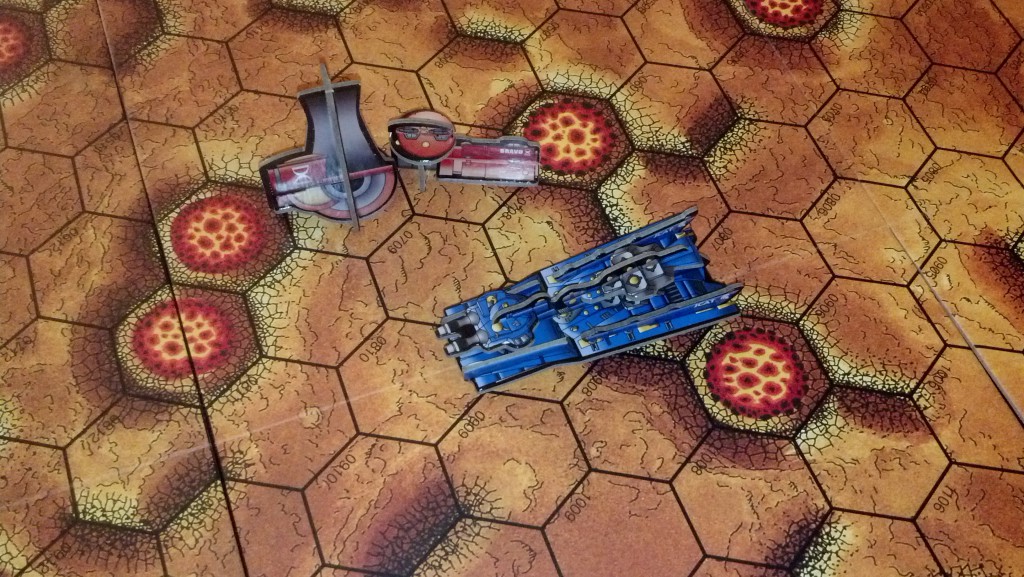 Another speciality unit, the Paneuropean Fencer Ogre, preparing to nuke a Combine reactor and unfortified CP. 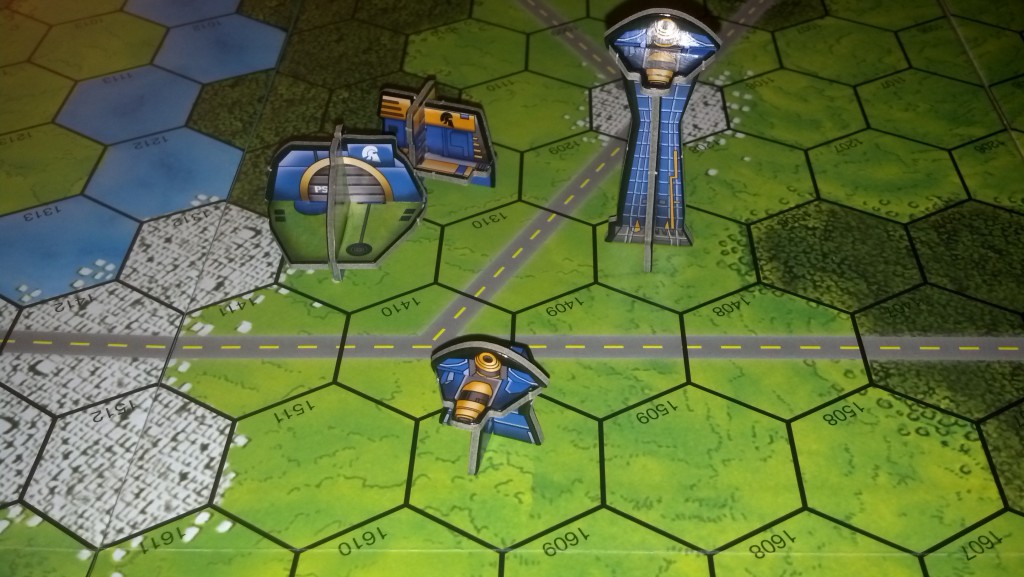 A Paneuropean Admin building is defended by a Stronghold, Laser Tower, and Laser Turret. 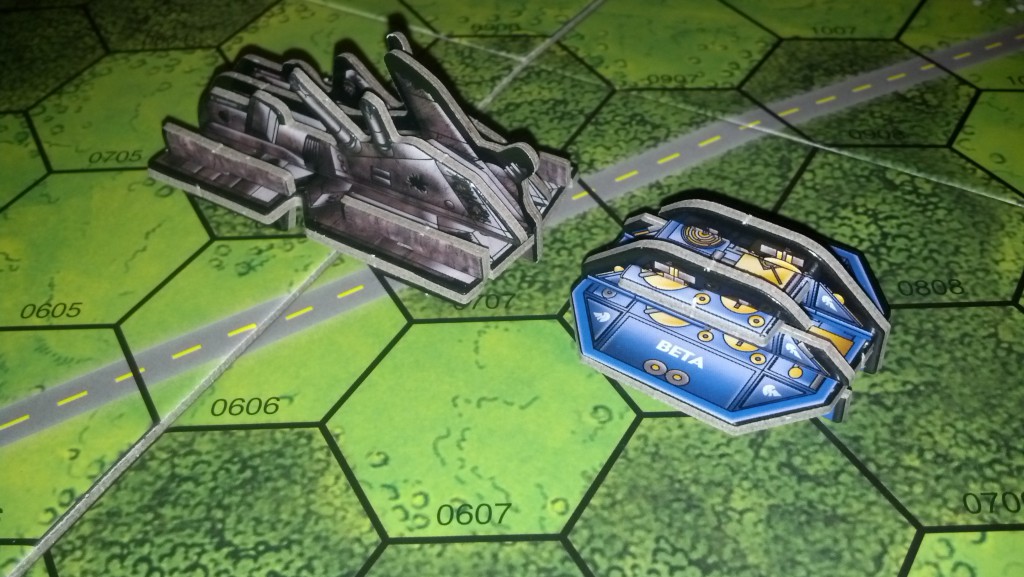 This fortified Paneuropean CP destroyed the attacking Ogre. You can see the breeches in the Ogre’s armor. 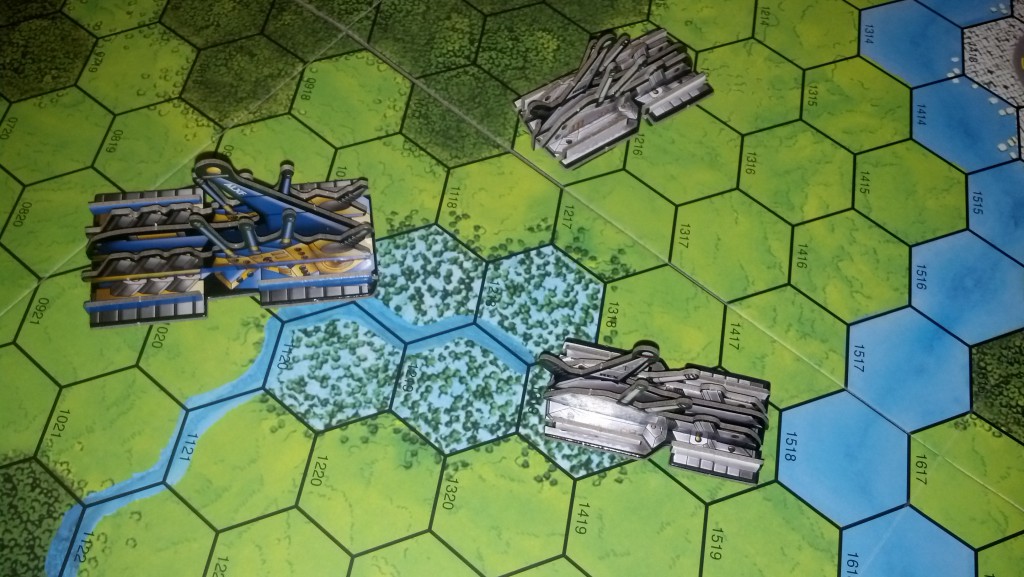 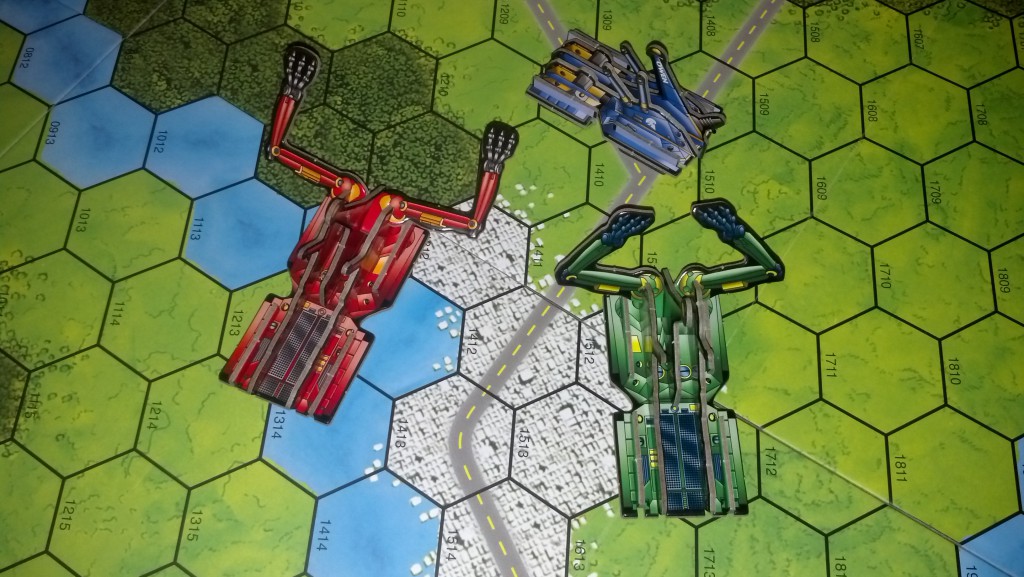 Speaking of speciality units, here are the Vulcan variants, with two optional arm positions. A Legionnaire Mark III Ogre is shown for comparison. 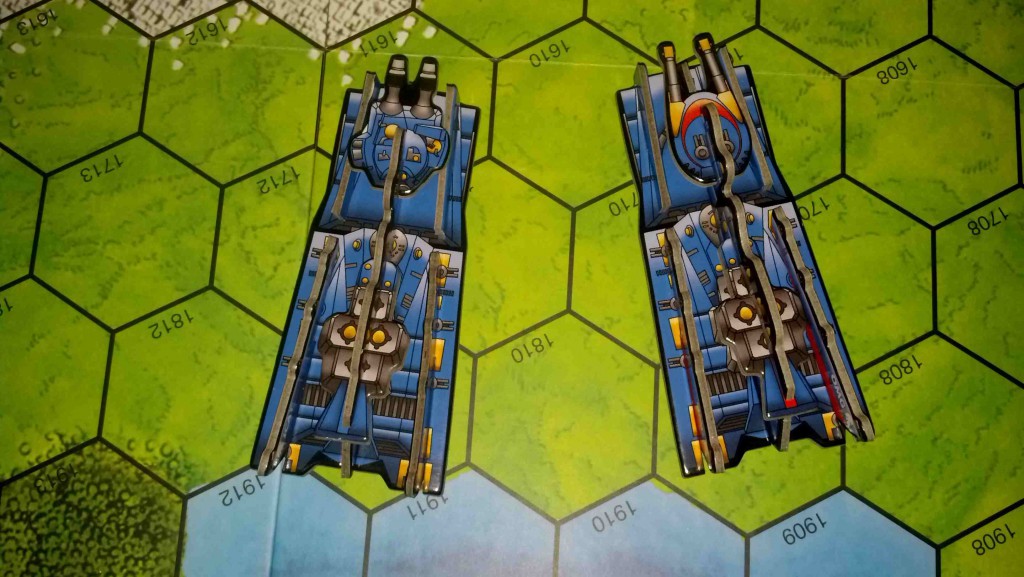 Both variants of the Paneuropean Fencer Ogre are included. The Fencer-B (left) and the standard Fencer (right). 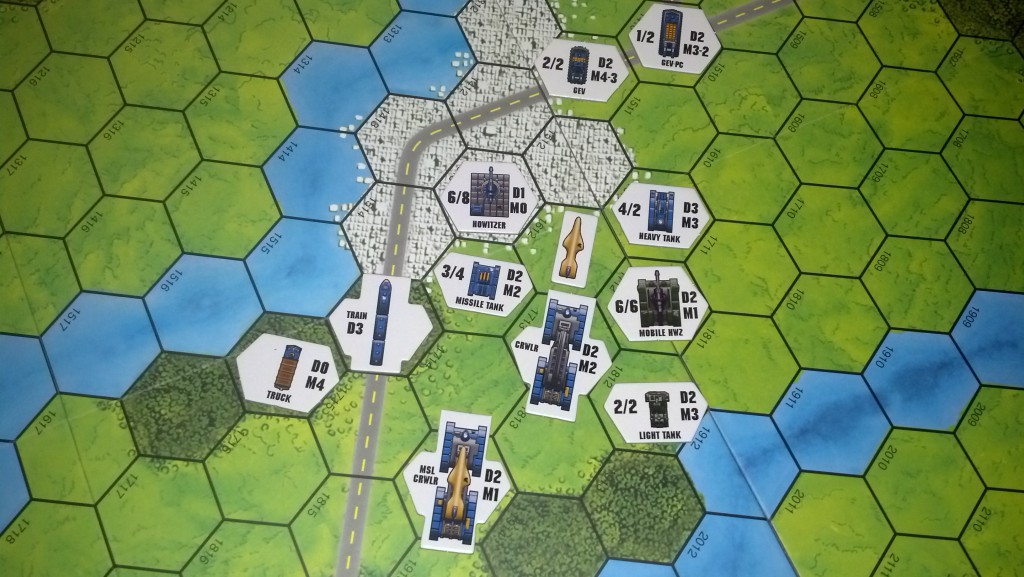 Most of the other units are represented by flat counters on super heavy card stock. 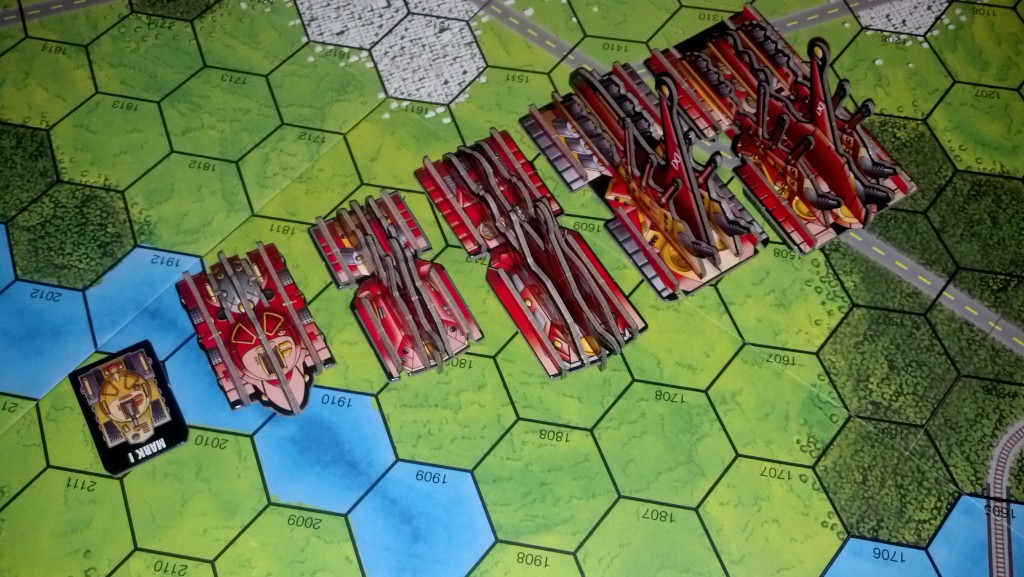 And, of course, the big boys. The Ogre Mark I (far left)  is represented by a flat counter, but given that is is basically a sentient Super Heavy Tank, that makes sense. The Mark II (to the immediate right) is about as small as the cardstock can be folded with any real details. Next on the right are the Ogre Mark III, Mark IV, Mark V, and the rather daunting and awesome Ogre Mark VI (far right).

If you are an aficionado of the Ogre series, like I am, the Designer Edition is a must have. I was a little disappointed the G.E.V. variants were not represented by 3D models, but they, like the Mark I Ogres, would have blown the scaling out. This is particularly true when you consider the thickness of the cardstock used in the game.

There are ample counters for the non-3D pieces and, as I mentioned before, a staggering amount of overlays for map customization. The colors are bright and the printing quality is very high. I did not find one misprinted piece in the entire lot.

The die cut was spot on! The pieces came free of the cardstock with a minimum amount of pressure, meaning no ‘stubs’ or tears on the models. The models also fit together tightly without the need to warp the cardstock sliding the pieces together. Having said that, I will be using a thin bead of white glue on the models (with the exception of the Vulcan’s arms), because I don’t want normal gameplay to wear them out. The built in storage trays have plenty of room for assembled models, negating the need to disassemble any of the pieces from the base set for storage.

The basic game play is still easy to learn. My youngest picked it up in about ten minutes and was whomping my butt in fifteen. Kinda discouraging given this wasn’t a video game. If you are looking for a basic game with scalable objectives, you cannot go wrong with this one. Just remember, it will take about three hours of prep work, punching out the counters, overlays, and models, before you get started with game play. Also, unless Santa is feeling particularly generous, hold onto your wallets! This big, bad boy is a bit exclusive and pricey; being only available only at Warehouse 23 and retailing for $100. Having said that, check eBay.

Steve Jackson hasn’t lost his touch. Ogre is as entertaining and engaging as I remember. I was floored that my girls took to it so readily, even if it did mean spending time with nerdy, old dad. Now that I know the edition of Ogre is so much fun, I can’t wait to see what SJ does with the reboot of Car Wars!

Paul is not a hard core gamer, he is an enthuastic amatuer. He does love to play board games, but mostly what he does is write in fits and starts. You can catch up with him here. If you’re looking for a great stocking stuffer idea, Paul’s first published short story, “The Winds,” is part of Dirty Magick: Los Angeles

– an anthology exploring the crossroads between urban fantasy and noir; mean streets, dirty magic! Pick up your Kindle or dead tree copy at Amazon today!