Review: Into the Dark 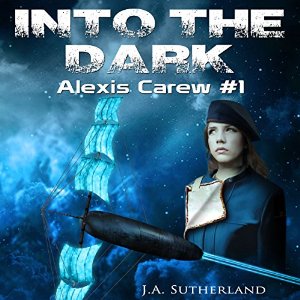 Into the Dark by J.A. Sutherland
My rating: 4 of 5 stars

DISCLAIMER: I received this copy in exchange for a review.

This is not a hard (or even mild) science fiction story. You need to set your expectations from the start. _Into the Dark_ sets the stage as an epic space fantasy of operatic proportions. Once you wrap your mind around science-as-magic, this is a fast-paced, enjoyable read and, a wonderful introduction to Science Fiction for Middle-Grades to YA.

There are favorable comparisons to Horatio Hornblower and Honor Harrington, both in setting and characterizations. This is a coming of age story wrapped in high adventure. Lass leaves a home with no future for the rigors and challenges of the space navy!

One of the wonderful surprises is the MacGuffin of Dark Space. In this region, travel is only possible by sail. Effects of this environment negate modern equipment and armaments, giving the notion of travel and combat a decidedly 19th century feel. The application of this was a tad inconsistent, but the overall effect is shiny!

Our hero, the determined and resolute Alexis Carew, doesn’t fall into tired tropes. Even though small of stature, she isn’t “spunky” or “feisty”, nor does she have the physical or genetic advantages of Weber’s Harrington. She comes across as driven, almost to the point of implacability, and her social interactions, some quite remarkable for a 15-year-old, are genuine and real.

The narrator, Elizabeth Klett, is a absolute jewel! Her diction, pacing, and accent shift from character to character, giving the listener immediately identifiable vocal prompts. You always know who is speaking. The audio production is smooth, rich, and clean. I heard no muddy audio or uneven edits. In addition to providing distinct voices, Ms. Klett has the gift of cross-gender characterization. The male characters sound definitely male, not just faux-deep voiced.

There were a couple of areas where I cocked an eyebrow and said “Huh?”

Dark Space (like Tahiti) is a magical place. It isn’t internally consistent. Apparently electronics will not work there, but lights and life support will? There is some notion of a cushion of “normal space” surrounding the hull, masts, and spars, but if so, how does Dark Space interact with the sails? What is the motive power? Shouldn’t the scans show the area contained by the “normal space” envelope, instead of just going dead?

I felt bludgeoned by the refrain “patriarchy is bad,” repeated ad nauseam. Apparently, this is going to by a major plot line moving forward in the series. Hopefully, Alexis can affect positive change, otherwise this clod of dreary will weigh down a mostly positive and upbeat work. It’s also unevenly applied. Colonials seem overrun by the notion, but the civilians in the core worlds aren’t. Conversely, the Navy on the fringes has no problem with equality of gender, but the Navy in the core worlds support, and even advance, patriarchy.

One of the reasons I put this book on a Middle Grade to YA shelf is Alexis is seemingly never severely challenged, or placed in any real peril. She rises to events in workmanlike fashion, and there is never any doubt that she will prevail unscathed. Even when captured by pirates there is no insurmountable menace, no feeling that she may suffer. Weber’s Harrington loses an arm and an eye. Alexis occasionally loses her patience.

*OVERT-SPOILER-STARTS*
In one scene, a full grown sailor attempts to rape Alexis. Please note that her size and mass are frequently referred to as small; smaller than a prepubescent boy, in fact. Yet, she manages to beat this large, tough, nasty man like a rented mule. Belief isn’t just suspended at this point, it’s unhinged. Mass matters. The type of skill she exhibited is acquired by an lifetime of extensive training, not casually picked up at a logging camp.
*OVERT-SPOILER-ENDS*

My reservations are the only reasons for my categorizations. This is a taut, action-packed, easy-to-listen-to story, well narrated and produced. I wouldn’t hesitate to recommend this novel to listeners of almost any age.

View all my reviews