Where the western half of I-64 ends there’s the city of Wentzville, Missouri. Nice place of about forty thousand souls. The fastest growing city in the state. Chuck Berry lived there. Montee Ball and Ross Detwiler played high school ball there. It’s a perfectly pleasant place. It took Thing1 and I a little over eighteen hours to get there. Less than five minutes later, we were gone.

Family has always been of primary importance, and my wife and I have tried to pass that on to our children. Which is why we were taken aback when our oldest announced her decision to seek her master’s degree from the University of Denver.

“Yes,” she replied, with a hint a waspishness.

“But, that’s two thousand miles away,” I said. “You could stay here, and get your master’s from VCU. Save money, borrow less, and have more when you graduate. Besides, I can’t just hop in the car and drive to Denver if you need help. At best, it’d take a couple of days, and I’m not comfortable with that.”

Her undergraduate years had been hard enough. She had been fifteen hours away, in Searcy, Arkansas. It was a doable, if somewhat difficult, day trip. There had been two concussions, and a broken collarbone during her time there. When she needed us we had traveled there immediately. Through it all, we had missed her terribly but there had been an end in sight, and the assumption was she would come home.

However, she was firm. The gypsy in her wanted the horizon. She was answering that call, my comfort level notwithstanding. In hindsight, my wife and I brought this on ourselves. We have striven to raise strong, independent, emotionally secure women, perfectly capable of taking care of themselves, and those around them, if need be. We’d reaped what we’d sown.

I don’t know how to express the combination of pride and stark, raving, lunatic terror I felt about this decision. Over the course of the summer, I watched as she set up her two internships, found an apartment and a roommate, secured a part-time job, dealt with the administrative maze that is post-graduate student financing, (all of this by phone, mind you) and packed everything she valued into shipping boxes.

How do I tell my adult child that I believe she isn’t making smart choices, and still give her all my love and encouragement? How do I say that she is breaking my heart, without breaking her spirit? How do I let go? Had I been such a bad father that she couldn’t wait to be rid of me, or such a tepid one that she didn’t need me anymore?

The time rapidly arrived and we planned our trip. I thought it best to break the driving in two, spending the night in the Saint Louis vicinity before traveling onto Colorado. I-64 ended in that area, and we could pick up I-70 west, straight on to Denver. Wentzville looked perfect, nestled in the crook of those two highways; a way station to the west.

We hopped on I-64 at Richmond, just slightly west of the eastern terminus in Chesapeake, Virginia. She packed her car to overflowing with the earthly possessions she couldn’t cram into the eight by four U-Haul we were towing. Google Maps said the travel time by car to Wentzville was about twelve hours. It did not account for the maximum towing speed of 55 miles per hour. After eighteen hours, we stopped in Chesterfield, Missouri, about a half an hour east of Wentzville. We were beat, and we weren’t even halfway to our goal yet, still plodding along on I-64.

We found a hotel, ate a quick dinner, and crashed around 6:00 PM. I wanted to grab about five or six hours of sleep before getting up at midnight to continue our trip. (Thing1 and I like driving at night. Less traffic and it’s cooler.) Except, I was far too keyed up to sleep. I tossed and turned, wondering what it was I did or hadn’t done, to influence my daughter’s decision. With the ADHD clarity that comes from sleeplessness, it became evident there were so many times I had dropped the ball:

It used to be that we were very involved in karate, traveling to the national championships a couple of times. Once she left for her undergraduate, I dropped out of karate and started putting on weight. What message was that sending her?

I mean, I tried using FitBit with the rest of the family after Thing1 went to college, but we gave that up. In two and a half years, we’d spent $1200 on devices (eight purchased, four no-charge replacements). The quality of these devices is…suspect? I know we couldn’t afford it anymore.

I don’t know if it’s just my family or what, but the wristbands kept coming unglued, the buttons fell out, water always seemed to be getting under the crystal; each of these happening on every device. And, for a tracker that’s supposedly rated at one atmosphere, why can’t you submerge it? Swim with it? Run the Rugged Manic with it? You can’t even replace the bands on the models we purchased.

We finally switched to Garmin (at half the price of a comparable FitBit model, mind), where you can replace the bands, submerge it, etc. We were just too hard on FitBit, I guess. I will miss the FitBit community though. All the challenges (thank you, Lisa, for setting those up!); I’ll even miss JRD and his bell-curve busting step counts. Was this a reason for Thing1’s decision? My willingness to leave a community I was invested in over money?

Then, there is the writing. Thing1 is a prolific writer. At the moment, she has no desire to be published (other fish to fry, you know), but she loves the experience of writing. You’d think we’d have that in common. Except, we don’t.

I quickly totaled up my costs in my head; three websites (I know, right?), a mailing list, cost for the PO Box for my mailing list (none of which I have used in over a year), podcast gear getting dusty along with my vocal and audio editing skills, and a Patreon page with nothing to show for it except a weak video I took down.

The family does have some expenses that require my working a second job for a while to make ends meet, but not so much that I should’ve given up on writing and podcasting. But, I did. Have I been telling her that giving up is okay? Is that why she is separating herself?

Rest was elusive and fitful. I finally managed a couple of hours and we got back on the road about midnight. Thing1 immediately went back to sleep in the car, the deep, restful slumber of a calm and determined mind. We passed Wentzville, riding I-64 all the way out to the bitter end before turning west on I-70.

The remainder of the trip was long but uneventful. Kansas has rolling plains. Colorado has a big sky. Water is wet. Film at eleven.

We arrived, unpacked, returned the U-Haul, and begin setting up her apartment. She was excited. I was miserable. I tried not to rain on her enthusiasm, to put on a brave face and really be there for her. That was largely a failure until I saw some of the things she had deemed necessary to take with her.

There was the cross-stitched, baby blanket her mother made for her when she was born. Her first stuffed animal. A small, cheap, Thing1 Seuss figure we’d given her a number of years ago. A paper figure of Olaf (from “Frozen,” one of her favorite movies) that I’d made for her one Christmas. A box of Star Wars Legos that had somehow been “accidentally” packed. And, sitting in a frame on her bedside table, a picture of us taken her freshman year while her mother and I were dropping her off at school. I’m giving her a piggy back ride. She was so happy and joyful. Like she is now.

Finally, she drove me to the airport. I waited for my flight back to the east coast. She’s ready for this new chapter in her life. I was/am very sad and very happy. And, very confused. My earnest hope was that someone didn’t ask me why I keep wiping my eyes. I think I might’ve just collapsed if that happened. College was hard; this was wrenching. I know, you must let go in order to let them grow. I know this. It’s not like I have a choice in it anyway. I can advise. I can pray. But, I can’t dictate.

Instead, to give myself a feeling of some measure of control, I’ve made some resolutions. The Ellis Clan Richmond will continue stepping with the Garmin activity tracker, even if we’re just challenging each other. Thing2 is entering nursing school this year, but she’ll be running most mornings. I’ll ask if I can join her. SamIAm and I will be enrolling in a Taekwondo program in August. We share a mutual trepidation over that.

And, I, well, I’m either going to resume writing or stop paying for all the ancillary services and sell my podcasting rig. One or the other. No more spectating. My writing is intensely personal, and I haven’t felt a lot like sharing lately. For an extrovert like myself, that’s been difficult.

My daughters’ maturation has left me feeling a bit broken and hollow. I find that despite my rather gruff and macho exterior, I’m not as tough as I’d imagined. It’s disconcerting to discover that I’m not that stalwart bulwark against the world for them anymore. That reality is a fading fast.

Thing1’s choice of items spoke loudly. She wanted fond memories to drive her. Laughter to comfort and strengthen her, and all our love to sustain her. While reaching for her future, she wanted to be reminded of roots. She wanted bright spots of family surrounding her. She wanted to know that home would always be there. And, it will.

I want nothing but the best for my daughters. I wish only success for them. They will always be my baby girls, no matter how old they are, where they go, or what they do. I want to protect them, shield them, fix things for them, and keep them safe, always, even knowing that I must let them go, to find their own way, and be their own persons.

I love them with all my heart. That love is equal parts pride and pain, abundance and sacrifice, and joy and sorrow. It is true, burning, and unconditional. That love is the wound that will not heal. 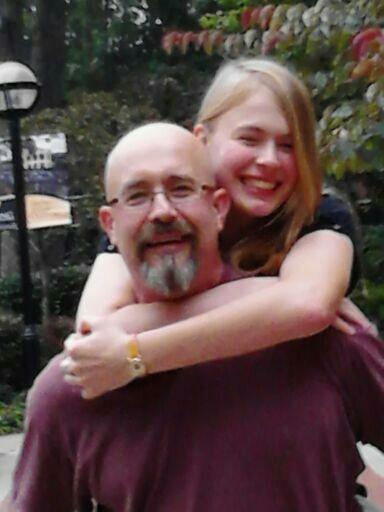